I had to finish the year by noting down some of the gatherings I managed in the second half of 2019. 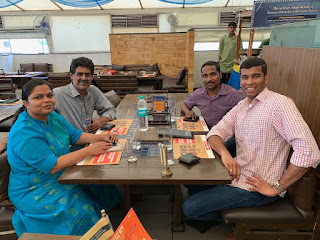 Sid and KK : Only one way to describe them - Two of my longest travel buddies and ever ready for any trip any time 😍 I can't remember a time when either of them have said "No" to a trip. KK was my college senior but as usual I had no interaction with him in college. We realized that we were working in the same company but in different buildings via one of the mails in 'SriFriends" - a yahoo group that another of our common friend had created for interaction of college-mates. We then planned to join an organised trek to Bisile Forest - my first ever trek in the lifetime which also kick-started the famous "wayand trip" that finally led to the formation of this 'travel gang'. We were actually four core members then. Sid was my junior colleague that time and got absorbed to this group soon enough (the only non-mallu or duplicate mallu as we called him) and took over the "planning" burden from me 😊 We have had many crazy adventures and also some very memorable trips. It will be a novel if I need to list down all of those memories and so I am not attempting that. Our trips have reduced a lot after Sid moved to US and also probably we have started aging and priorities have changed 😉 Anyway I am glad to have these meetups at least when he comes down here although this time other members of the gang could not make it. 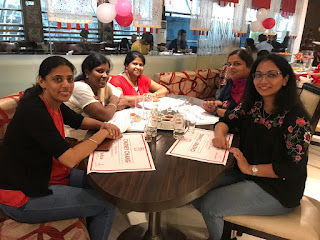 Silly Girls : We all were in a strange team with only girls and a sole guy (I have to actually say strange manager as he took only girls in his team!)  Ambili was the only married person at that time and she used to describe all of us as "Silly girls" although it is debatable who is the silliest one 😆 Work wise it was a hectic time and we spend most of our time in the office and as a team we supported each other enormously. It was also the time of my cooking experiments and we used to have a potluck lunch almost daily and they were the victims of my cooking experiments too  😂 Anyways that eventful team (we fired our manager) and the eventful days got over and we all moved to different teams but still kept the friendship going. Meanwhile Ambili moved to USA and some of us also left the company. Usually we meet whenever Ambili comes down and it is a large group with spouses and kids. So this time we decided to have a girl's(women's) day out. Yes Ambili was missing this time but these meetups do take us back to those early days of our career 😊 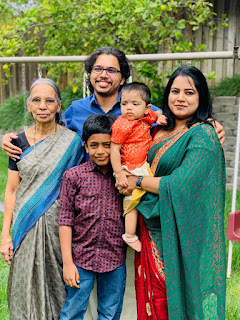 Mahesh : My joining in NIIT is a funny story. I had joined for EEE in REC Calicut that time and my mother had all sorts of "worries" of me moving away from home and finally I had to take the TC and join in GEC Thrissur. So to compensate my disappointment, amma found a 3 year course in NIIT which supposedly would make you job ready (to be frank it did as the only programming that we had in syllabus was Fortran programming!). It had an exorbitant fees that and on inquiry they told about some scholarship test and if I pass can get a fee waiver. I passed their test and got a significant fee waiver and so joined the course. Not sure if it is timing or the course structure or what, I was the only girl in the batch. The lab usage, assessments, projects and seminars was done on a team of two basis. So Mahesh was assigned as my teammate and we remained partners in crime for the next two years. I still remember our first seminar where we started collecting the info on the day of the seminar (last minute rush) and had lots of challenges as only one system had internet. We almost thought we will flunk as it was an external assessor, but could answer all his out of the box questions (Thanks to readers digest and such books I used to read those days). After the session our tutor came and told that he was really doubting about our presentation seeing our morning madness but we did well and guess what -we were the toppers that time(beginners luck) 😉 We continued the same madness in all the semesters and fortunately managed to sail through the course. Over a period of time even our families got closer as his mother was fond of 'girls' as she had three boys. Even after the course, we continued the friendship at a personal level and he remained my kid bro although he moved to US quite early in his career and we were not meeting in person that often. So it was good to catch up with him after 7 years although it was late in the night after an exhaustive day and a long flight for him. Unfortunately as usual I forgot to click a pic and so here is one stolen from his family album. 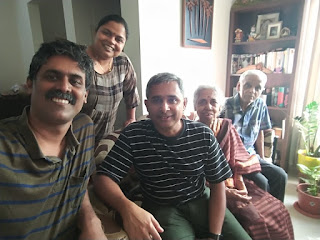 Uncle & aunty : Although I call them Uncle and aunty, they are more like my parents as I lived with them for 15 long years. Technically it's almost the same no of years that I have lived with my parents too. I had briefly mentioned about them earlier  They have been an integral part of my life in Bangalore  and most of my friends here know them quite well and vice versa. In fact, during the initial days almost all my classmates had the same address and phone number and uncle was the one who used to take the calls on everyone's behalf and passed on the message (pre-mobile era).  It was their presence that I missed the most when I shifted home to e-city. I do visit them often but it is never the same as living in the same house. Anyways when their son Kumar came down from US, they paid us a short visit 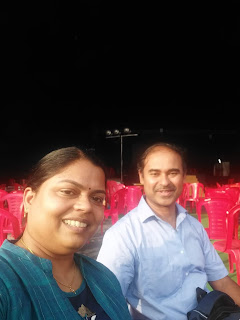 Jayan : He was my pen-pal in the e-mail world. Of course we were classmates in engineering but we hardly had any meaningful conversation during those days. It was the time when internet and emails were just coming in and although we had private e-mails, we had to go to an internet cafe to check that. Even in office we didn't have internet access in the desktop (Yeh we didn't use Google for our coding or error solving. God I am already feeling like coming from an alien generation). So most of us used the official email for private communication too and in the initial days, it was quite thrilling to get an instant reply for your emails. And those days only few of us from our class were placed and this was the time me and Jayan started our email conversations. This was before the blogging era and with my love for writing letters, it was a good break to have someone reciprocating compared to the one sided letters I used to send to my cousins. We talked about various topics - mostly stories, dreams, philosophy and all. I was in Bangalore and Jayan was in Mangalore and so we never met and later Jayan went for his MBA and we did not correspond after that and lost touch completely - what usually happens when your e-mail id changes. After his MBA, Jayan settled in UK and so this was our meeting after like 20 years and all those conversations came back. I think I really need to dig up those emails from the old pst files to find that younger me and my thoughts those days. Who knows it might be a book material as Jayan said 😈 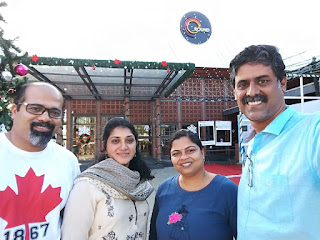 Santosh and Leena : There are strange ways in which people cross our paths and this couple is one such. Leena was my senior in school and Santosh was in another batch in NIIT Bangalore where I did my last semester of the course. I knew him by face but never spoke although both of us knew that we are from Kerala. So when we met outside of NIIT in the Raheja lift, we both were surprised and got acquainted (the famous mallu-mallu bonding 😀) He was working in the 8th floor and me in the 10th floor and so we met often mostly during the post-lunch walks in Brunton road. Later Leena also joined their company and we got reacquainted as we already know each other from school. Both of them got married and migrated to US soon after. Although we did keep in touch via blogs and other social media and was aware of the developments in each others lives, we were meeting in real life after 16-17 years. 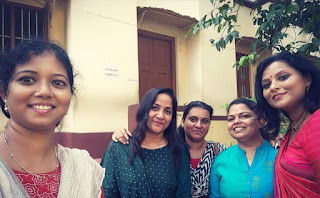 Changathikoottam : When the whatspp groups came in to existence, this was one of the first groups that I became part of which was a random group of few of our school batch-mates. This was before the overload of whatsapp Groups and so remained special for all of us in this group. As I was in a different division, I knew only a handful of them from school days but over a period of time, we all grew closer together. There were lot of real conversations and fun chats and the group was alive mostly 24/7 as different people joined in at different time-zones. Since most of the members are across the globe, we do meet when someone comes down. So this was one such meetup when Mumtu was in town and we did a short visit to school as well. And it is commendable that none of us lives in Thrissur anymore and still managed to come down to Thrissur for the meetup 😍 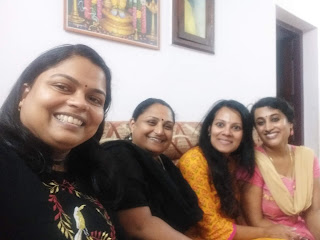 Neighbors meetup  : In our days, we had 90+ students in one division and there were 7-8 such divisions in each batch. So it is tough even to actually get to know the people in your own class and batch. But when you study in the same school from LKG till 10th and some times in the same subsidiary for PUC as well, you make friends beyond your classmates as some personalities do stand out. And when they all live in the neighborhood , why not have a get-together 😊  So that's how we all got together. Although we all live in the same area (at least earlier), most of us were meeting for the first time after school. And yeah there is an overdose of  Dhanya's here just the same way it was in school where most of the batches had 2-3-4 or even 7 Dhanya's in one class 😄 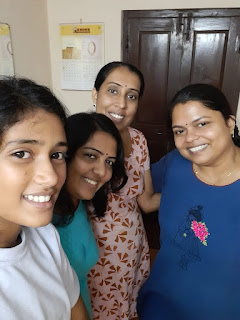 Dhanya and Co : I had written about Dhanya earlier so not adding anymore details here. We do meet often whenever we both are in Thrissur and sometimes even in cochin where she lives. So this was more of a customary meetup before the year ended 😄

There were few other meetups also with Ram's friends and also family. So I think the real world experiment did work and one important thing I realized is, we really loose track of the years that has gone by without meeting in this age of social media and virtual interaction. So I do plan to continue the same in the new year too. Let's see how it goes and how long I will sustain 😍
at January 08, 2020

Email ThisBlogThis!Share to TwitterShare to FacebookShare to Pinterest
Labels: MeetUp2019