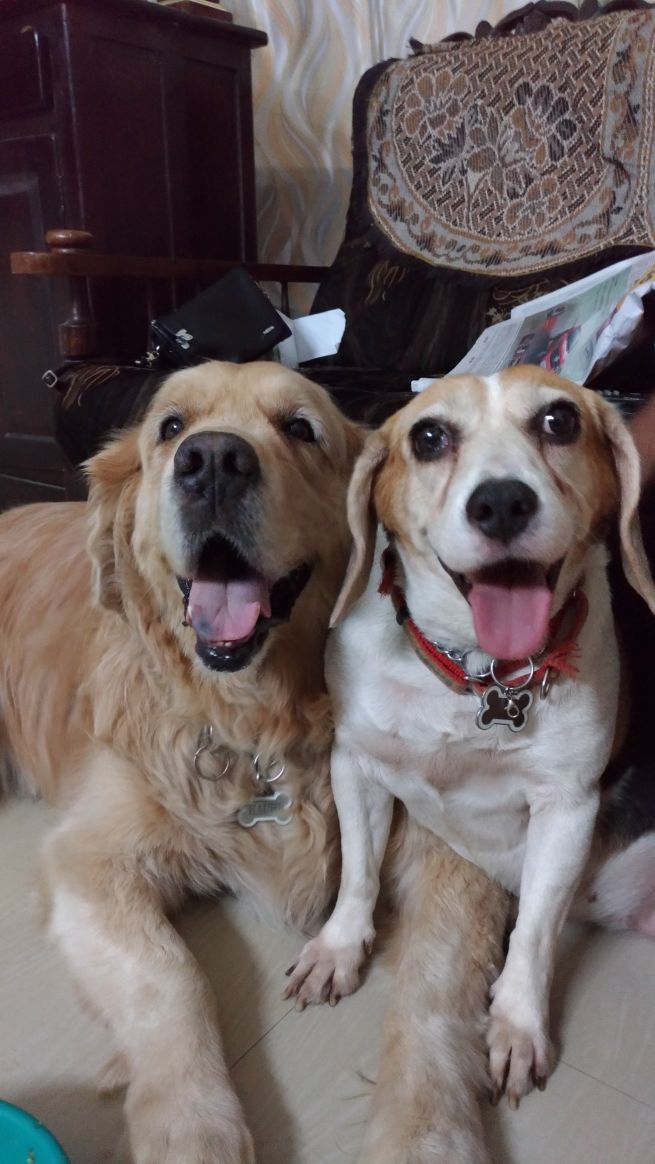 When I listed down the things that bring a smile to my face, one of the toppers in the list were of-course my pets.The love, playfulness, laughter, snuggles - when you think about it,It is a unique thing to create a bond with other than one’s own species.

I used to have cats at home right from my childhood. It was always a random cat who chose to walk in and decided to stay. They would then move on to some greener pastures after sometime and so I never had a real "pet" until Sony came along.  Little did I know the evils of backyard breeding or the trauma and the immunity loss the pups suffer from being taken away from mother and litter-mates earlier than 2-4 months. I do feel sad about Sony these days but sometimes you learn some life lessons the hard way.  Only thing I am happy about her is that she was never tied and roamed around freely in the compound all her life.  I really understood and encountered 'pets' after coming to Ram's house as there were 7 dogs and some of them were rescues and abandoned ones and Ram also had this habit of feeding and treating the streeties  too. Each of them had their own characteristics,  personality traits and demands. Kuttu was the boss, Vicky the guard, Arjun the foodie, Bebo the runner, Kushboo the pet demander , Amy the timid bloomer and so on 🐶🐕

Once we moved to Bangalore, hearing about the lab rescued freagles , we adopted one and that's how Diva came into our lives. She was almost 6 years at that time and had spend all her life in a body sized solidarity cage in labs. These dogs were put in the cages when they were puppies without any stimuli, not even sunlight and many were with their vocal cords removed so that they don't make any noise. Until a change in law in India, these beagles would spend their whole life like this and euthanised once they are no longer useful.

When she came to us she was terrified of everything and settled to a nook of our home and trembled. She didn't know how to adapt to a world outside of her cage - everything, from soil or grass or stairs or sunlight , was new to her. She didn't even know to eat anything other than pedigree and curd (even chicken she did not eat). She was under-confident, anxious , confused and her instinctive reaction was fear and the slightest sound or a sudden movement made her freeze. (3.5 years later even now she does that sometimes). It was to ease her around humans and to teach her "how to be a dog" that we adopted Hachi. He was abandoned by his previous owners and because I was fascinated by "Goldens" I approached the counsellor and may be because it is good for Diva, they chose us.

Although we mostly think we are the ones saving them, it is debatable who has saved whom as it is immense learning living with them on a daily basis. Each of my pets have taught me a lot of things and have helped me put life into perspective.

Diva will tell you that however old you are , there is always a new beginning. She will also teach you to move on , move forward , no matter what life throws at you. Also to appreciate the simple things in life, and find joy in them, like stopping and smelling every single car tyre in the lane 😉

Hachi will tell you to  Live In the Now - do not worry about the future or the past and simply enjoy the present moment and celebrate every day. He is just happy to have food, water, shelter and some people around who loves him.  Oh yeah and the most important lesson "Know When You've Messed Up, Own it , Then Get Over It". When he gets caught red-handed for some guilty act - he would hang his head , lower the eye and refuse to look at us in the eye (I guess most pets do the same)  But two minutes later, he moves on and seems to forget that it ever happened.  How simpler life would be if we could all shake the negative emotions off so quickly right? So next time any challenge that comes your way - Face it, deal with it and then let it go 😍
at January 21, 2020

Email ThisBlogThis!Share to TwitterShare to FacebookShare to Pinterest
Labels: The Year of Gratitude

Awww...love this...I miss the lil one and the big one.