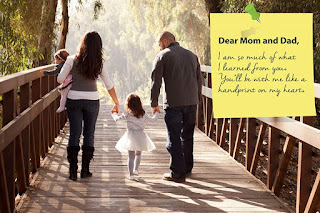 I guess this is one aspect in our lives that we mostly take for granted and I thought it seems right to give a little extra thanks to the most important people in my life - my family :  my parents and grandparents who shaped me. I feel the family don't teach you anything explicitly but you just pick up bits and pieces from everyone around and shape yourself.  One of the things in life we can’t choose is which family we are born into. However, I believe that every person ends up in the exact family they are supposed to be in. And probably this also prepares us to face all the experiences that comes our way in the exact manner in which it needs to be handled. Ever given a thought on that?

So for me I guess it is growing up knowing the best of both worlds - the urban environment where my parents lived and also the rural settings where I spent most of my childhood days which I had mentioned earlier. I haven't seen my paternal grandparents and my maternal grandfather also died when I was 2 years or so and so it was mainly my maternal grandmother who I was close to. I have grown up experiencing the grit and the strength my grandmother possessed in adverse situations - be it loosing a 35 year old son to cancer or a 1.5 year old grandson to  pneumonia or facing the adversities from own family. It definitely was not an easy task to give education to all six children irrespective of gender and make them all government servants in those days. She had a choice to relax when all the children were on their own feet but she choose to work hard and be independent till the very end. Her day started at 4 am and went through different activities in the kitchen, farm land and the farm animals. Never seen her rest in between and her day transitioned from one task to another seamlessly. Have heard amma tell that when acchachan was there, even the ayurvedic medicines that he used for consultation was also prepared at home by her.  She never hesitated when someone approached her with need or in giving of alms . Probably it was the quality of that generation who had seen it all - world wars , pre and post independent eras, famine and so many other experiences which we have only read in history books. She was able to maintain her calmness in any situation. I haven't seen her cry;ever - death in family, excruciating pain , distress situations - nothing shook her and she never blamed anyone for anything either. I have never seen her wish ill upon a person. In fact, I used to get furious in many such situations and wanted to react to the opposite party but she always maintained that confrontation is not worth it. Of course, I can't even be 1% of what she is but I am so grateful for that teeny weeny piece of her in me that is guiding me all through.
When it comes to my parents, they were in a totally different realm than my grandmother. They have also shown me some pretty good examples of how to live. They were happy together which resulted in a safe and happy childhood for me. It also helped me to understand the value of a relationship where you have mutual trust and respect.
They never smothered me with attention but was always there whenever I needed. In fact, every single incident in my life I used to tell my mother even though I very well knew she will scold me. But hiding anything from her was not an option.
And yes honesty too - it was fine to err but if I ever tried to lie, it was never forgiven and always they could figure it out without any difficulty and so that was again out of question.
They also made sure not to indulge me. I guess they were scared that I would be a pampered and spoiled kid and so was very careful. Think I was the least pampered and the one who got the most punishments among my peers at that time 😄
I grew up seeing how you can exhibit compassion and empathy in your own surroundings. In fact there were regulars who were dependent on them and they never turned them down - ever. There was always a part of their earnings kept aside for this. Even animals and insects were not to be harmed  (And I have no clue how I got a husband with the exact same principle)
Another thing I realize in hindsight is that they always lived below their means. Since both of them were govt servants and didn't have any liabilities, there were many luxuries they could have easy afforded but they chose not to and also lived debt free their entire life. So now a days whenever I use a credit card I remember them and feel guilty 😒
They taught me the importance of education and allowed me to be independent and support myself.
Of course there are many instances in my life when I felt they understood me or pampered me a bit more or was more liberal in the house rules. But probably it is this upbringing which was the biggest learning that helped me survive the lonely path after they passed away.

So yes, no matter what life throws at us, we CAN handle it as our families do prepare us for the same.  For all that our parents do for us, there is no way of repaying them, but an occasional thank you or an acknowledgement to appreciate them, might just make them happy. Sometimes we miss the most important people in our lives. I am mad I didn't get the chance to thank them when they were around 😒


No matter how much we argued, or how much I upset you, I’ll love you till the day I die