The earliest memory that I have is waiting at the verandah of amma’s ancestral home for Anuchechi to return from school. Her school was just few buildings away and I could hear the bell ring and almost immediately the flock of kids filled the small lane in front of the house. I’ll be patiently waiting there to get the first glimpse of her and used to jump with joy when I could spot her in the sea of similar looking kids. Anuchechi is my cousin 7 years elder to me and it won’t be wrong if I say I idolize her (even now :P) So I used to feel jealous when I see her with her friends. At least my 2 year old self was conditioned to think that she is MY chechi(yeh private property) and no one should come near her :P In fact my possessiveness towards her was a means for Kuttettan (her younger bro) to pick a fight with me. He knew I will be unfazed whatever he does to me but the moment he does anything to chechi, I’ll be all charged up to fight with him :)

This house which I used to call ‘avva veedu’ (I have no clue why I gave it this name) is in a small village and is very special in my memories. I spent most of my infancy here and later most of my school vacations and even now is ready to give up anything to spend a day there in the same old environment. Amma was working in a school there and we were staying there for the ease of baby sitting I guess. Same was the case with Anuchechi as mema (mom’s sister) was also working and it was not so easy to manage two kids without help. Then there was Acchacchan who was always serious (I have only vague memory of him). I do remember him sitting in the front verandah in the evenings and some or other person will drop in to exchange pleasantries. Some days I used to sit in his lap and listen to their conversations. Amma had told me later that he was a follower of Advaita philosophy and many people in the village considered him quite knowledgeable and used to come to him for advice! Ammamma was always busy with one or other chores – cooking, cows, hens, harvests or making medicines (Acchacchan was an ayurvedic practitioner as well). Valiyammavan was also staying in the house. I can’t remember whether the other two ammavans were also staying there at that time though they used to come there very often. Rather I think they were not staying there as both of them were working in other districts. Can't remember the younger cousins as well. So mostly it was only these many who stayed there :) Acchan used to come on weekends and Anuchechi had told me that she used to long for his arrival as he always came with some goodies to eat. I used to love his arrival coz whenever he comes he used to take us to the paddy fields near by and I used to be so charged up seeing the vast fields. A walk on the muddy and slushy ‘varambu’ was bliss for me :P 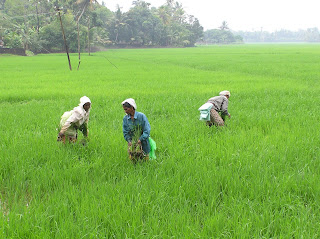 The fun time was always in the evenings when the entire family gathered in the courtyard and chit chatted. This courtyard was kind of buzzing all the time. During harvest season,it’ll be full of ladies doing the katta methikkal(the process of removing grains from the paddy by stamping or beating the straw), cheral (removing dirt and stones), nellu puzhungal(boiling the grains before removing the husk), uralil idikkal(manual way of hulling, or removing the husk from rice in a stone gadget) and all such activities related to it. I don’t know if these things are still done anywhere in kerala :( It was such a delightful experience. This was also the place where we used to play and our stage for the extra curricular activities. I still remember the dance that Anuchechi taught me n Kuttettan and she used to make us practice it here. I even remember one step in that where all three of us were going in circles holding a lotus mudra : D Unfortunately only she pursued dance later and we were no where near ;)

PS: I was half way through this post when I got a call from chettan (my brother in law) saying Anuchechi has delivered a baby boy early this morning. Since she is mentioned many a times in this post I thought I'll share the happy news here as well :) I so much yearn to see her and the lil one but unfortunately we are half a globe apart :(
at August 19, 2011

Email ThisBlogThis!Share to TwitterShare to FacebookShare to Pinterest
Labels: Memoir

Nice one .... your naration took me to my childhood too ..I too cherish those memories ... During those time of harvesting, fisrt thing i used to do after school was to go to vayal with my achamma. I beleive now those paddy fields are only in kuttanad and very few places like that ....

Beautiful narration. Many of your posts bring in a lot of nostalgia. Keep writing.

what a lovely world you grew up in. I thought these places existed only in old Malayalam novels and valluvanadan kathakal. Sigh.

And yea same pinch on the globe-apart nephew. I have one too :-(.

But keep more of these memoirs coming. It's giving me such goosebumps I could almost feel it's my past you're talking about!