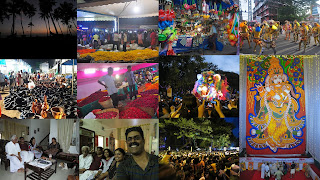 Another Onam has gone past and for me it is a festival that evokes so many memories; some very nostalgic and some bittersweet. Like in most Kerala Hindu households, we celebrate only two main festivals in a year - Onam and Vishu. In both these, the highlight was the kodi or new dress as those days’ new dresses where limited only to these festive occasions and the lip smacking sadhya in a plantain leaf. And of-course Onam used to be tad more favorite coz of the 10 days of school vacation after the first term 'Onam Examinations'.

During my childhood, the first activity related to Onam used to be preparing of pookkalam (floral carpet) early morning on a small cow dung smeared patch in the yard. All the flowers came from our garden itself and the variety of designs used to be in the colors of flowers and leaves used. After the exams when the vacation starts, the designs became more grand and intricate.  There were also the small local kids groups who used to do the Kummatikali and Puli kali. They move from house to house collecting money and amusing children. And temple visit was mandatory on Thiruvonam day.

When I moved to the city for work, the pookkalam decors were limited to the office ones during the customary Onam celebrations. Where else to find a cow dung smeared yard or a backyard to pluck flowers? And I was not in favor of store brought flowers for a ritual that was originally meant for integrating humans with nature. Every year a visit to home was mandatory as amma was very particular about the family to be together at least for Thiruonam which was the main festival day. I used to enjoy these visits as I always felt the high-spirited people of Kerala celebrated Onam with gaiety and fervor. So there used to be high energy in the air during this time in Kerala. During my travels in train, I used to enjoy looking at the different pookkalams in front of the houses and the happy kids playing. The landscape itself would have turned fully green with blooms all around. The heavy monsoon would have given way to an occasional drizzle as if to keep the atmosphere cool. The Nila on the way used to be full only in this season and would give a loud echo as train passed through. The markets and cloths shops would be crowded and some onam fairs/melas would be seen everywhere.

I remember for one Onam when I couldn't take leave, acchan and amma travelled to Bangalore. That was the first time they had come to blr in the entire seven years’ timeframe I was here and it was the last Onam together for us as a family. They stayed for a month where we went for some site seeing which was again a first except may be some temple visits. Three months later acchan passed away.  Next Onam was difficult without acchan, but I didn't want amma to be alone on an Onam day either. So as was the tradition, went home and that's when amma first complained of her chest pain. So despite being the Thiruvonam day I took her to hospital and though the junior doctor doubted some variations in ECG, the senior doctor told that it is fine and she just needs to come for regular checkups. On hindsight, I feel I should have waited for one more day for the hospital visit as doctors also might have been in a hurry to join their family on this festive day.  Unfortunately the junior doctor's diagnosis was correct and amma joined acchan the very next week. Onams after that was literally a nightmare although I kept coming back to an empty house and made the sadhya all alone year after year. After my marriage I couldn't continue as my in-laws felt going to an empty house for Onam was not required (which was logical), but the very thought that the house is silent and locked for Onam gave me heartaches but I didn't have a choice.

So this year, it felt so surreal to be back in a lively livable house for Onam after almost a decade. It was so fulfilling to walk on the familiar streets, the buzzing market places, to visit the neighborhood temple, or just be in the Thrissur round watching the Puli kali procession. Onam has changed in a huge manner over the years and there won't be any going back. Almost all traditional flowers in pookkalams has given way to market bought ones which are cultivated exclusively for Onam season, Onakkodi has lost it's significance as now we buy new dresses without any occasion, home-made sadhya is slowly giving way to ready-made ones, Onam family gatherings are giving way to club celebrations , traditional onam games are almost extinct and the biggest entertainment seems to be the 'beverages'. Now a days I hardly see any Kummatti groups coming to houses and even Pulikali seems to have gone the commercial way. Nila has remained dry even this season which indicates the severe damage we have done to the nature and although originally a harvest festival, not many families are into agriculture and so nothing to harvest and 'buying' is the new norm. But as they say sometimes you will never know the true value of A Moment until it becomes a Memory... So just wanted to cherish these moments and record it before it fades away from my memory.