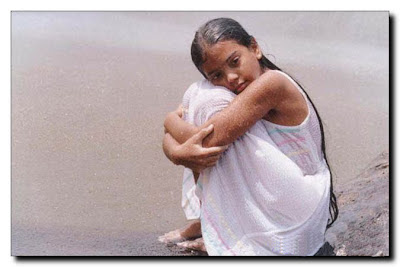 I watched this Mani Ratnam movie (It's an old movie released in 2002) yesterday and I have to say it is one of the finest I have seen in a long time. It does more than just "A Peck on the Cheek" - the characters are well etched, the tale is narrated with lot of feeling and maturity and some of the scenes would bring a lump to your throat or even wet your cheeks. Maniratnam yet again proves that he is at his best when tackling human emotions and relationships. His visual language, his high standard in movie techniques, the way he leads his actors and most of all, the way he tells his stories are all simply outstanding..

The film explores the emotional turmoil of a little girl in search of her biological
mother amidst social and political hurdles, and the effects it brings upon her foster
parents. If you would like to know the story read it here or here,but I have to say it is no substitute for watching the movie..

All the actors have given their best performance but the show stealer is undoubtedly the child artist P.S. Keerthana who portrays Amudha, the nine year old girl. The way in which she responds with a multitude of emotions when she realises that she is adopted unlike her brothers, her determination to search out for her biological mother, the way she yearns to see her mother and get a kiss from her,.. She evokes so much sympathy and her expressions so natural and spontaneous that she leaves you bewildered. She has delivered a convincing and exceptional performance and it's hard to believe that this is her first film.

In short, this is a breathtaking cinematic achievement that takes the viewer on a sensual and emotional journey. So if you haven't yet seen the movie, it's worth a watch. You will easily fall in love with the characters..
at May 14, 2007