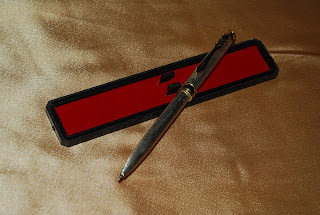 The fact is that we have been moving fast to the e-world and now that the electronic signatures are gaining legal recognition, you don't even need to take the pen to sign a cheque book or a credit card statement.. So friends if you still own a pen, do treasure it.. They will be a valuable antique in years to come - put them away as heirloom for your grandchildren!!
at June 18, 2007

What you have written is exactly right. Yep, the keyboards are slowing down our fastness of writing gradually...so its the cons of our e-world.
Though we are now telling that we can read/write/speak Eng/Mal/Hindi/whatsoever, sooner we may have to tell read/speak these languages:-(
I have noticed/heard that most of these s/w developers who used to write their personal diaries, too changed themselves to typing in MS word or so:)

yeah, I have to agree 100%. Whenever somebody tells any info such as telephone or address, the first thing i do is to open notepad or wordpad and start typing the info that is dictated. It never occurs for me to write it down in a notebook and use a pen .

@Resma : Yeh it's really true.. Actually I myself is a living proof. I used to write personal diaries and now I've upgraded(or degraded) myself to writing a blog!!

@ Venkat : Even I'm no exception. Most of the times whenever I need to note down something, the first thing that comes to my mind is the notepad. Even in training I don't 'write' notes. Instead will type it in a notepad :(

What you have written is true with majority of the people. But there are few [like me ;)] who still write letters and diaries.. Other than for official use, Most of the times I prefer my mother tongue to write.

you can convey the emotions and feelings behind your words more effectively in letters than in e-mails.. Thats my opinion.. :)
Its all how we practice n continue.

well , lot of people still use pen and notepad in office. but yeah, the last time i had to write long in the paper, my hands were paining too.
guess its going to be keyboard age soon, not that i am complaining.

Manikutti I think I'm an exception in this case. I speak to my parents everyday. Still I write letter my dad. He loves and treasures everything that I write. He is maintaining a big file of letters. I write to my cousins as well, the mother tongue language in english script :) I know there are many who have forgotten writing, but still there are equal number on the other side who still live with a scribling pad and a pen. Even when I dont carry the laptop to the training or meeting, I'll have my scribbling pad and pen with me.

I absolutely agree... We are so - "computerized"! Gone are the days of writing lovely heartfelt letters!

@ Jaseem : yeh even I use a pen n notepad in office. But it's limited to writing my todo's for the day or some points in some meetings. No continues use :(

@ Nirmala : Guess you are a true exception here.. Even I ve written a few handwritten letters to my friends recently but that was only to go back to the past sweet memories n never took it up regularly..n yes it's true that the handwritten lettes have it's own charm that the phone conversations or emails can't give.. that personal touch.. I have treasured each n every letter that I have received till date from various sources.. It's fun to read it later.. U come to know many things about yourself that u had forgotten ;)


@ biriyanikkutty : Thanks a lot for coming by. Since most of my readers can't read malayalam, it will be tough if I write in malayalam. Also I'm not confident either :(
n just for curiosity - Are you someone whom I know? ente veettile peeru vilichoondu choodichatha..:P

@ Priyanka : Yep that's a sad reality :( think we should consciously try to go back..

Very true Dhanya. As you said I too miss the charm of words on paper. And good tip there to save a pen. May make us all millionaires when it disappears completely.

Also want to tell you your blogs are very nice. If not scribbling with a pen, you are at least tapping away your thoughts on a keyboard. Good work and keep going.

the last time I wrote with a pen, my colleaugue thought I was rough scratching the paper to get the ink out of the pen.
needless to say no one could read it ( including ofcourse me)
so I giess I will stick to writing notes on laptop.

You are absolutely right about the writing part. 90% of the time, I use the keyboard. I write just for the fun of writing and to keep my beloved pens from getting the feeling of being neglected. But given a choice, I would prefer the keyboard...Never given much thought about it. But so true. Technology advances and we move along... now with tablet PCs and handwriting recognition, I think, people are rediscovering handwriting...

@ Deepa : Yeh I'm going to preserve all my pens now :D And thank you for your encouraging words :)

@ Jeseem : That's really bad :( Even I used to have a decent handwriting but now it all seems to have gone..

@ Alexis : Good that you make use of your pen. Think I should conciously make an effort now.
We can look at it as a technology advancement also from ink wells to fountain pens to ball pens and may be the next generation is keyboards ;)

So true is what you have said ..I also realized that fact some months back .. but now I dont watse a chance to write ..

and now , as my daughter is learnign to write, i also write with her .. partly for motivation and partly for me :)