I really can't believe it is already June - the last month of the first half of the year. We will soon be stepping in to second half of the year and in a flash the year will also be gone. Anyway it is time to do a reality check on where I am related to the goals I had set for myself. When I decided to reduce the virtual footprint and meet friends in real, never did I imagine that I will be bumping into ones I haven't met for half my lifetime!!!


If the first meeting was a planned one, the second one was totally unexpected. Sudheer is my senior in college and probably one of the very few outside my class whom I knew by face during that time. Coming from a convent school, “politics” and affiliation to any party was limited to whether our class would be left out on that day when the boys from the neighboring school came demanding a 'long bell'. Our sisters were clever enough not to let the syllabus suffer by allowing all the students to go. Their strategy was to use a rotation mechanism in which different divisions where let out alternatively each time strikers come. And we used to longingly wait for that memo which decided our fate for the day 😉Sorry I am digressing. Anyway even at home , my parents believed your political affiliation is personal and never discussed it openly. 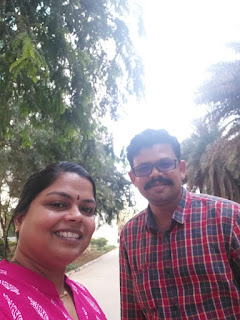 With such a background when I joined engineering college, the first day itself was a strike day. Reason -  a final year student was stabbed to death on stage the previous night during their sendoff party due to a political rivalry. That was my firsthand experience of campus politics. I was never a fan of campus politics and believed(still believes) that at such a young age it is very difficult to have a proper understanding of the ideologies that the parties represent and most youngsters follow one or other blindly. This experience kind of enhanced my hate and I always kept a distance from any of the political activities in the campus.  But it was not so easy – the strikes , the rivalry , the fights – everything was real – no rotation to protect classes or sisters to defend us. So my policy was to scoot (jump over the compound wall outside our class and escape 😛) when we get the first glimpse of anything remotely connected to politics . Our class being in a remote corner of the campus, far from main building , helped and I had some like-minded  friends in this activity.  So when Sudheer came with a political group and when they were addressing the class about some issue, he saw us slipping out and got angry that we were not concerned about the important issue that they were talking.  Anyways if I remember right we did manage to escape that day also and probably many more such scenes in the coming years.  For a fresher, not listening to a “Mech senior” was considered suicidal those days.  I can’t remember any other interactions with him during college days but I never forgot that angry face (considering I am very bad with remembering faces). It was after college that we started interacting – I guess initially for the placements and later through the travel group and developed our friendship. Then as usual life happens and he also shifted out of Bangalore.  Since we now work for the same company albeit different cities, we bumped in to each other in the company canteen and decided to catch up for lunch the next day. I really couldn’t believe when Sudheer mentioned that we are seeing after 15 years. Probably it is one (dis)advantage of social media – you won’t realize the years passing by even if you haven’t met for many years since you are updated about the life changes in each other’s lives or at least the ones that we choose to publish. Anyways it was good to catch up with him and know that his political interest is still intact and is quite active in the field. Wishing him a bright political career and hope to get some perks when he enters active politics. I just hope he recognises me then 😉

It was Honey chechi who triggered our plan to visit Australia and it was quickly executed coz hubby was keen on the India – Australia series that was happening there (although we missed it which is another story). But again never imagined that short vacation will lead to meeting so many friends after long. It feels like hardly anyone is left in India and you need to fly out of the country to meet a larger group 😑 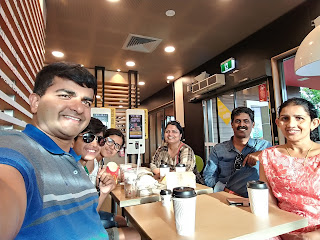 When three of us landed in Bangalore fresh out of college we were coming out of a protective life for the first time - not even any hostel experience till then. So when we moved into Honey chechi's house - it was a huge learning curve. Our first lessons in cooking , housekeeping , financial management and many more were from her who guided us expertly with her 2 year seniority .  The designated place for each and every object at home , the group cooking with rotation based chores , our accounted money 'pool' - everything was so orderly in our lifes back then.  There are so many memories although it was only for a year and then the “New man” came in to her life and took her away 😀 But we still kept in touch and visited each other over the years. So cannot really say it was a long break but yeah it was 18 years (or may be 15 years if I consider UK visit )since we stayed together. It is good to see that she still maintains that order in everything she does even now. So when you show someone their house video, you won't be surprised when the viewers ask whether this is really a place where people live in 😄 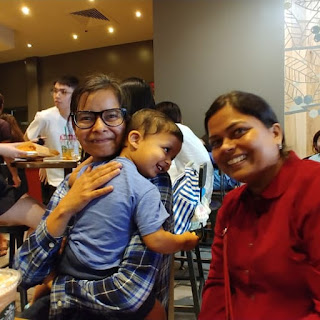 Anubha was again one of the firsts who contacted me when I put up the post to meetup. I know her from the NSN days where she was one of my mentees and initially appeared to be a quiet and soft-spoken girl. Later, once we became close, we got a taste of her naughty , fun and talkative part. She is very hard-working and someone you can blindly trust your work with. You ask her to do something and it will be done in the best possible way and no follow ups are necessary. I haven’t met her after I left NSN which was 8 years back and in this timeframe she had migrated to Australia. So I was so excited to meet her along with her baby. A short but sweet meeting I would say ❤ 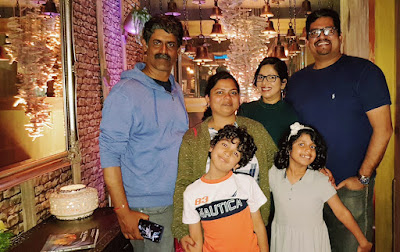 Denny is my engineering classmate and the one before me in our class rolls. So in all of our lab groupings he was stuck as the only guy among 3 of us girls until we finally exchanged him with another girl who was in a similar situation with 3 guys 😂 He was one of the NRK students in our class with broken Malayalam but the favorite Bhai of everyone. I hadn’t met him after college as he was an early NRI. I wasn’t even sure if we can make it when I msged him as we were landing in the evening and returning back the next day. But he picked us from airport, met his lovely family over dinner and then we had a long chatter late into the night.  He was probably the one who I am meeting after such a long period - 20 years!  It was so nice to catch up after so many years and know that nothing has changed and we can just start from where we left during our college days.
There were still many more who I missed meeting in Australia as we choose to be in Tasmania for the major part of our time there. But yeah I am sure everything is possible if we just wish for it… 😍

Email ThisBlogThis!Share to TwitterShare to FacebookShare to Pinterest
Labels: MeetUp2019

Lovely! So the experiment has been a success!! Loved reading this one ❤️

Yeah working like charm and have lots of time for real stuff;)

As a sign of gratitude on how my son was saved from Attention Deficit Hyperactivity Disorder (ADHD) , i decided to reach out to those still suffering from this.
My son have been suffering from ADHD since the year 2016 and it was really tough and heartbreaking for me because he was my all and the symptoms were terrible, he always have difficulty with communication,and he always have problem paying attention . we tried various therapies prescribed by our neurologist but none could cure him. I searched for a cure and i saw a testimony by someone who was cured and so many other with similar body problem, and they left the contact of this doctor who have the herbal cure to ADHD. I never imagined ADHD has a natural cure not until i contacted him and he assured me my son will be fine. I got the herbal medication he recommended and my son used it and in one months time he was fully okay even up till this moment he is so full of life.ADHD has a cure and is a herbal cure,you can contact the doctor for more info on drwilliams098675@gmail.com on how to get this medication, Thanks.