Chimmony Jungle Camp - A Jungle to get lost in

We have been traveling extensively for many years now. But the trip that we had during the Diwali weekend has beaten everything heads down. It is full of unique and crazy experiences and I just can’t resist penning it down

It was KK who found the details of the programme from outlook traveler and booked for the five of us – KK, JK, Sid, me n Rash.
The Jungle Camp package was roughly like the following:
We will be taken to a tented accommodation on the eastern edge of Chimmony Reservior. Once in the camp on the banks of a stream we can go for treks, bird-watch, swim/relax in the pool at Cherpulikkuth etc. Check in time 10 am and check out after breakfast the next day.
But since we wanted to be in Chimmony till evening they suggested us to go for either of the following the next day.
a) Come back to Chimmony and go for a bamboo raft ride (can combine with short treks as well).
b) Go for a trek to the highest peak in the PA, the Ponmudi peak (1116 m). They said the trek passes through some good rain-forests and the view from the peak is breath taking and the trek will take about 6 hrs.
KK was too keen in making the most out of this trip and so he wanted to have both. So we decided to take the 2 hr raft ride before going to the camp. We had gone to the dam last year and were impressed by its calm n quiet atmosphere and so all of us were looking forward for the opportunity to be there for two days. Our plan was to start on Thursday evening around 6.30 pm and reach the place by Friday morning. Two hours prior to the trip Pint called up and said he also wanted to join. He just couldn't resist the raft ride and joined us in 1 hr :) 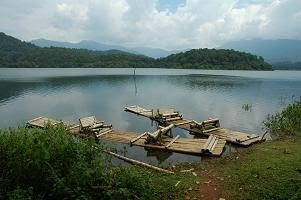 We went straight to Chimmony on Friday morning. At the check post, met the officers and they took us to the dormitory. After freshening up and a quick breakfast we were set for the first activity – the bamboo raft ride. This was the one all of us (except may be JK ;)) were eagerly waiting for. Since there were 6 of us they took us in two rafts. The rafts were beautifully made with nice bamboo seats so that we can sit comfortably without getting wet. It was a bit sunny in the beginning but later it changed to a pleasant one. 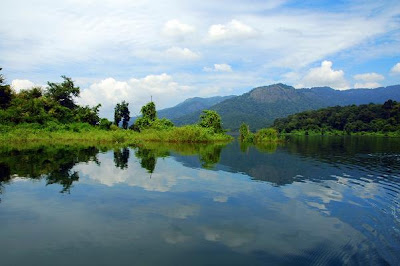 The place had a very soothing effect and had all the settings of a perfect holiday - far far away from the crowd, just amidst nature, nature and nature all around. And about the scenery surrounding us – what can I say? It’s far too stunning to describe in words. You can’t help but be mesmerized by the silky, shimmering waters and the stately mountains and hills filled with trees that stood proudly on almost all sides. We were busy savoring (or trying to savor) the beauty around us in the cameras (These are some situations were we realize that man/camera has limitations but nature doesn't). 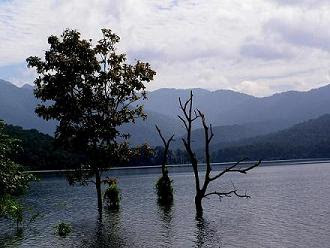 Once we got used to the raft’s balance we were comfortable moving up and down. We even tried our hands in pedaling (not the main one of course). After sometime Pint got the idea to jump into the water (he can never resist a plunge). So Pint dived first. KK and Sid followed. Sid even swam from his raft to ours which was little far apart (n got exhausted).

Pint was insisting us also to jump but we didn’t want to wet ourselves…We then heard some elephant’s noise and so decided to try our luck in spotting it. So everyone returned to the respective rafts and we started again. But after some time pint got restless and started splashing water all over me. I was totally wet and so we decided not to leave others too. 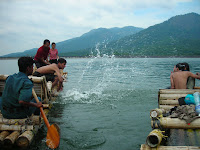 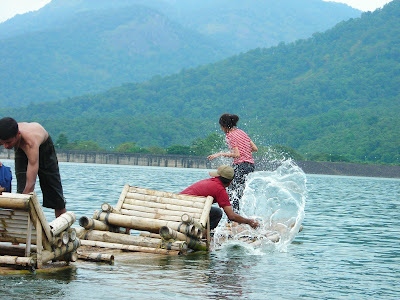 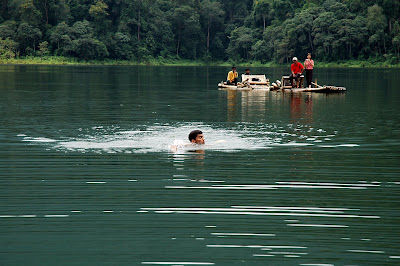 The first target was obviously JK who is supposedly hydrophobic. In order to escape from us, he took 2 cameras, put it through his neck and was running around. But after a lot of effort we managed to take the cams from him and then it was real fun time. Splashing water all over, jumping from one raft to another, pulling others to water,… Pint even tried some diving and ended up in some distance from the raft and I had to pull him towards the raft.


In another 10 mins all the 6 of us were in 90 ft deep water without any life jackets and none of us were expert swimmers either!!!! Anyway after frolicking in water to the hearts content we returned to the IB. All of us were really hungry and so devoured the simple and delicious lunch waiting for us.


To the Wilderness
After lunch we started towards the camp site. A 45 minute ride in the speed boat along the lake took us to the depths of the sanctuary on the eastern edge of the Reservoir. We were accompanied by an armed forest guard with communication facilities and 4 tribal men. Once we got out of the boat and trekked to the campsite, we were exposed to the virgin forest which was the home for all sorts of creatures and many medicinal plants. We could spot some huge praying mantis, some rare flowers, medicinal plants, different varieties of mushrooms,… 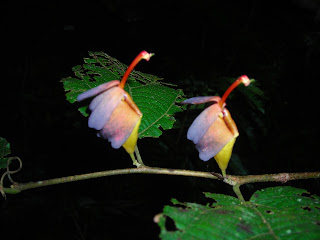 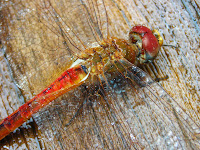 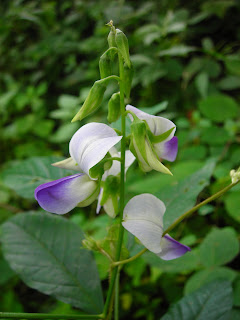 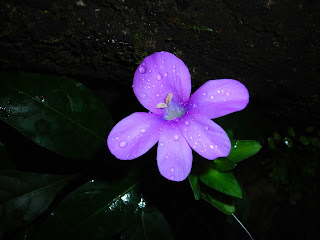 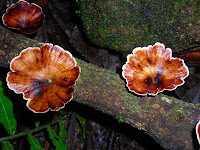 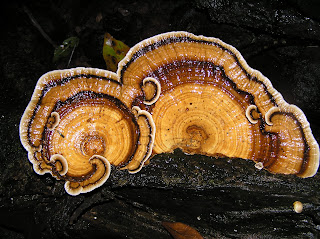 The camp site was a clearing near the stream and some elevated base was already there. Our hosts (they are the tribes from the settlement of Echipara) were quick in setting up the almost ready made tent 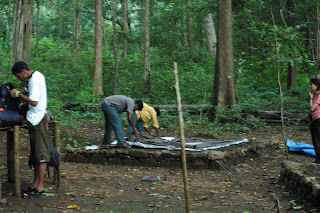 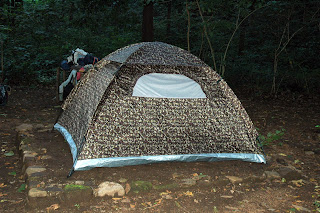 After spending some time near the stream we headed towards a waterfall nearby. That was a beautiful sight indeed. 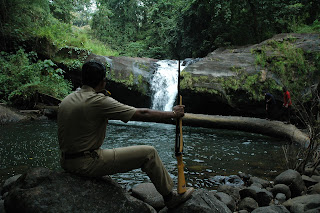 There was a tree lying horizontally from one end to the other (kind of natural bridge) and it seems they used it for collecting honey (info from KK). We walked on that tree and went near the falls. But after sometime it started raining and we got completely wet. 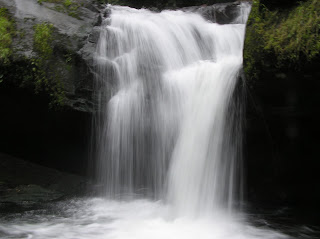 After spending sometime there we headed towards the next falls. It was a stream flowing through the huge rocks. They said in monsoon the entire rock area will be covered by water. By then the light was very dim and Pint tried out some excellent long exposure shots. 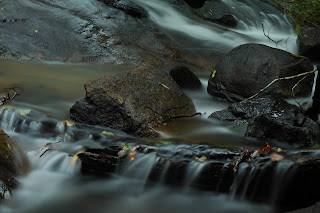 As the dusk fell, we came back to the camp site. There the lanterns (I’m seeing it after a very long time) were kept on the dining table (don’t mistake. It is a nice bamboo structure) and a camp fire was also lit(tho it got extinguished soon). We were ready to crash but discovered that the tents were wet due to rain :( Our hosts immediately changed two tents under the tarpaulin and they were busy preparing dinner for us – chappathi and peas curry. After relishing the same we immediately went to the tents and crashed while our hosts were awake. It seems in the middle of the night some wild boars came and they shooed them off. They then lit a camp fire so that some more attacks will not be there.

Email ThisBlogThis!Share to TwitterShare to FacebookShare to Pinterest
Labels: Travel

Nice post about your camp in Chimmony. It is a nice place to visit. Thanks for this lovely post in this blog. Love to read about your travelogue. Want to visit this place then book your bus tickets in YBM Travels to comfort your trip.

As a sign of gratitude on how my son was saved from Attention Deficit Hyperactivity Disorder (ADHD) , i decided to reach out to those still suffering from this.
My son have been suffering from ADHD since the year 2016 and it was really tough and heartbreaking for me because he was my all and the symptoms were terrible, he always have difficulty with communication,and he always have problem paying attention . we tried various therapies prescribed by our neurologist but none could cure him. I searched for a cure and i saw a testimony by someone who was cured and so many other with similar body problem, and they left the contact of this doctor who have the herbal cure to ADHD. I never imagined ADHD has a natural cure not until i contacted him and he assured me my son will be fine. I got the herbal medication he recommended and my son used it and in one months time he was fully okay even up till this moment he is so full of life.ADHD has a cure and is a herbal cure,you can contact the doctor for more info on drwilliams098675@gmail.com on how to get this medication, Thanks.